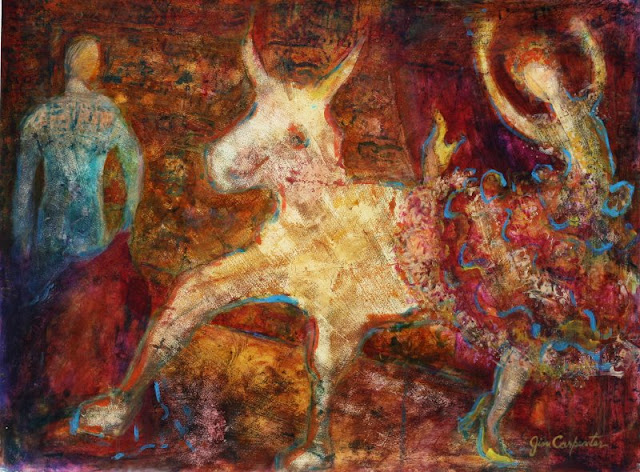 My colleagues in our co-op, the Melrose Bay Art Gallery, are hosting a themed exhibit entitled Hooves and Horns. As you might have already guessed, it will consist of images of any animal that has a horn or a hoof, save perhaps unicorns (I think the jury is still out on that). Needless to say, there are some fine painters of horses and cows in Florida, especially in our neck of the woods. In fact, Sue Johnson, the co-op member who came up with the idea, is herself a formidable painter of horses. She has invited some of the best and most serious painters of *Hooves and Horns* in the State to exhibit at our charming co-op, which is located a half-hour from Gainesville. Sue, blessed with the generous conscience of a public school art teacher, thought it would be fun if everyone in the co-op were invited to contribute to the exhibit. Well, of course I want to be co-operative, but painting horses or cows is not exactly my forte. I paint flowers… I mean, I used to paint paintings of flowers, and now I paint paintings that are more intuitive. I don’t know horse or cow anatomy. Say “hooves” to me and I think of *hoofers* and if you read my first post you know enough to figure that when I hear “hooves” I see tap dancers, not cows. So I asked if the image needed to be *realistic* and was assured that whatever I came up with would be all right… fanciful was ok. I set to work on it, hunting for a possible bull with horns in one of the several *starts* I had hanging around my studio. I knew from the beginning that I would paint a bull, or maybe a cow, but I didn’t know where it would come from or where that bull or cow would be in space and time. I suppose that for those who know me, that the bull ends up onstage flanked by a matador and a flamenco dancer comes as little or no surprise. That it is a white bull, smiling and dancing center stage, upstaging the matador on stage right and the high flinging Spanish dancer on stage left, makes me wonder what this bull is really all about. Of course he is looking at us, not at the audience. Rather mischievous, isn’t he?

I had a lot of fun painting Toreador, Toro, Tra-La. I listened to flamenco music and classical Spanish guitar and the mambo from West Side Story over and over again on my iPod as I stood before the paper with paint and brush in hand. At some point I found myself thinking of all of the ways in which I had encountered *hooves and horns* in my lifetime. The first time I heard the words “El Toro” I was to play the bull in tap shoes in a dance recital, holding my hands up to my head and pointing my index fingers out from my forehead to represent horns, pawing the ground three times, and then charging through an imaginary cape held up by a taunting young lady matador. In 1968 I saw a bull fight in Spain and took movies of it with my Dad’s camera. The bull was sort of unwilling to charge so rather than waste the film I turned the camera on only when the bull charged and went through the cape. The result, much like one of those timelapse films of flowers opening, was a hectic charge-and-spin dance between the matador and the bull. And finally I had to think of that cow in the musical Gypsy for which I choreographed a soft shoe, and for which I was engaged in negotiations with two high school students over who was going to get to play the front end and who the rear end. I can still see that cow’s head, made by then student artist, Crystal Sullivan. She put a colorful crown of flowers on the cow’s head. I thought of giving them to the bull but the bull wasn’t asking for them. That is, I couldn’t see them on the paper and so I would have to impose them. Then I heard my cousin Richard saying, “Enough with the flowers, already!” I look at Toro here, sans flowers, and I think that he could be ready to do that soft shoe, and that if we were to tug we might lift his head and find some generous chorus member there, sweating under the weight of that bull costume. Maybe. Maybe not.

No matter. The painting’s characters, that dancer (hoofer) earnestly kicking up her high heels (hooves) through all of the fabric, that toreador with his straight back to us, facing the audience full front, and with his own unseen hooves firmly planted on the stage floor, and the playful entrance of that bull, winking at us with only two hooves showing and being the only one with horns, all seem to represent something to me that moves beyond their status as stock characters. Even though I watched the painting evolve, I am still surprised by what ultimately showed up on the paper. I look at this painting and I laugh and say, “Oh! So that’s what I was thinking!” Not-Knowing, as I like to say, leads to Knot-Knowing.

Smile from the Heart
Posted by Unknown at 11:47 AM 4 comments: