Directing The Eye Through Composition and Word

Directing The Eye Through Composition

Artists use composition to focus and direct the eye of the viewer.  You might find as you look at this painting that you first look at the figure that is in the highest position, and then move to the large figure in the center and then to the tallest figure further to the right. And then you notice the long line of figures moving from the right to the left at the bottom of the paper. Then back up to the figure on the upper left.

The easy and natural path for the western eye to follow is from left to the right, the way we read. And so that figure up there on the left is perhaps the starting point of travel through the painting.  The figure in the center - the center being a hot spot - would dominate the painting were it not for the height of the figure on the upper left or the size of the figure to the right of center.  There is a balance and a tension between these three figures. Who they are and what they represent may not be specific but they are in positions - on the page - that suggest they have more authority or power than the other figures in the painting.

Then we come down to the figures starting on the right side of the paper. They seem to be moving left, or rather, our eye is traveling left with them.  This travel goes against the grain - the opposite way of our reading habits - and this makes that movement strong, giving these smaller figures some strength of focus.

Directing The Eye Through Words

How the viewer looks at the painting can also be affected by the title. I came up with three possible titles for this painting.  Let's try each one out and see how it affects the way the painting is viewed. 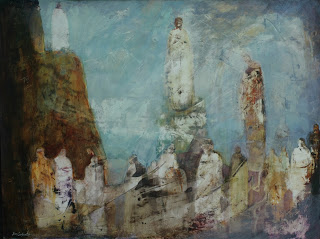 If the title is "Above and Below" the viewer is encouraged to see two levels and to make sense of it - the top and the bottom, the big guys and the little guys, the spiritual and the human... there are countless possibilities.  It focuses on polarity.

"The End of the Pilgrimage" 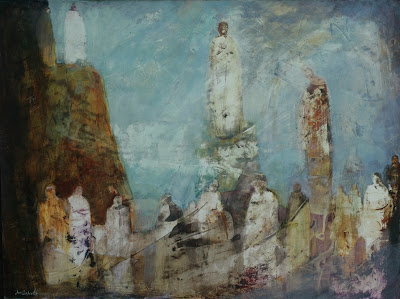 This title does all that the previous two do, but adds some new direction for the viewers. It adds character and plot and meaning in a way that the other two titles do not. When I think of this as a snapshot of the end of the pilgrimage - that is, the pilgrims/travelers have arrived at their destination - I am led to look at the figures at the bottom in all of their positions, and I see that the positions indicate a state of being for each character - an attitude.  At the same time the figures above them also take on more human characteristics. What are they thinking now that they have their audience before them?  Are they a part of this or are they looking for something else?

I try always to allow plenty of room for interpretation of my paintings.  What this painting is really about is something that only the viewer can decide.  Though a "pilgrimage" is generally viewed as a journey to a sacred place - the pilgrims in the middle ages would travel great distances to view the relics of a particular saint - a pilgrimage does not have to be solely about the sacred.  It can stand as a metaphor for any journey of great import that we happen to be on.  What happens once we get where we are going?  The end of the pilgrimage is something to consider. 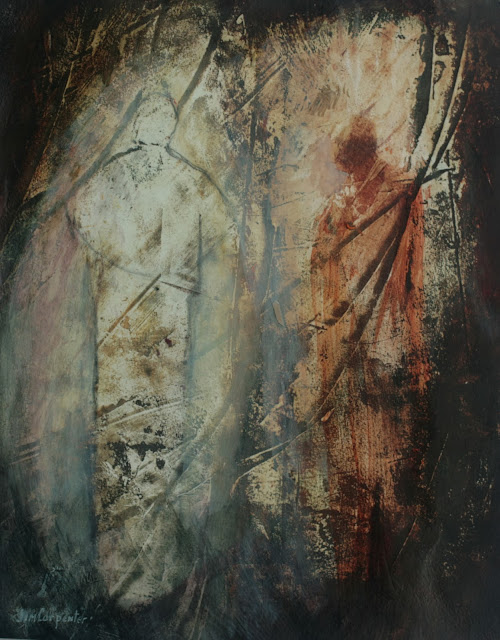 Transfiguration: A Change of Shape or Form

"Trans" is the Latin preposition meaning, among other things, "across." We see it everyday in such common words as "transatlantic" "transmigration" "transportation" "transfer" "translation" - and now your mind is reeling with all of the "trans" words you know that I haven't mentioned, right?

The word "Transfiguration" was first used to describe "the change in appearance of Christ before his disciples," but later its meaning broadened to include the secular -  "a complete change of form or appearance into a more beautiful or spiritual state."

I think that this painting suggests the mysterious and miraculous types of trans-formation we might experience ourselves or witness in others.   And I think the relationship between the two characters is an interesting one to consider.  How does "trans-figuration" apply to each of them?  What is being trans-figured here?

The capital "F" that I placed in the middle of "TransFiguration" has a purpose: to remind the viewer of "the Figure" and to suggest the notion of "figuration" - the act of drawing figures.  And, I also wanted to connect this painting with an earlier work that I titled, "Figuration." 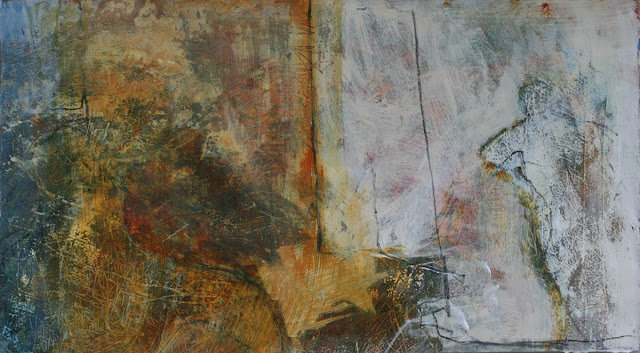 "Figuration" has always made me think of "the figure" being created from out of the chaos.  We start with chaos and somehow manage to pull out of it - "draw out of it"? - some meaning, literal or figurative.

It's good to be back!