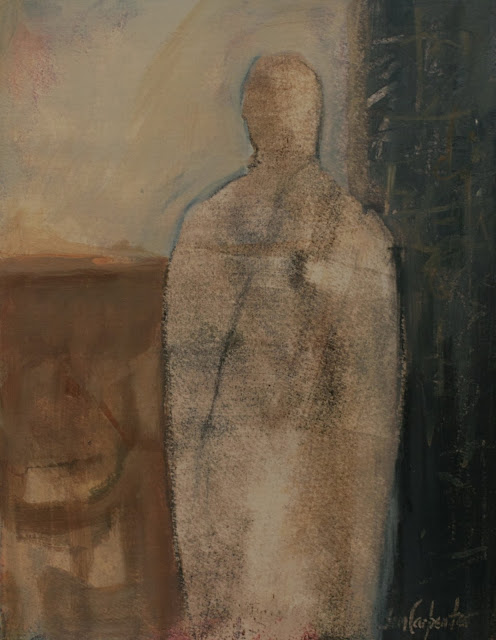 
Ah! I need solitude. I have come forth to this hill at sunset to see the forms of the mountains in the horizon — to behold and commune with something grander than man. -Henry D. Thoreau  [Journal, 14 August 1854]

Although the word solitude can have some negative connotations, like loneliness and isolation. There is something positive to be said for seeking solitude from the business of the world. Thoreau leads the way in explaining the benefits of seeking solitude.

This painting was a struggle.  I wanted it to be something much more elaborate and perhaps a bit more colorful, but it would have none of it.  As I've noted before my paintings seem to have a mind of their own and don't care much one way or the other what I want.  The paper has been through a lot of painting and scrubbing. It was in every orientation at least once and populated with many figures, but none of them were satisfying.  I was very close to abandoning this piece of paper forever.  I suppose a little bit of solitude would have helped both the painting and me at that point.  So I left and had dinner.

When I returned to it I decided to start on a new piece altogether but I kept being called back to this now aged piece of paper.  I had two figures in it, superimposed and not very successfully.  I kept thinking "get rid of one of the figures" and then argued with myself "but if you do that there will be only one figure and there's nothing else going on in that painting." Then I thought about several other paintings in which I had just one solitary figure.  And I thought, "Keep it Simple, Jim" and so I said to the painting, "If that is what you want to be, then so be it."  I proceeded with the idea that this was going to be a simple painting with simple shapes and a simple neutral palette.  And now, I sort of love this painting.