Taking A Break From Doing and Entering Into Being 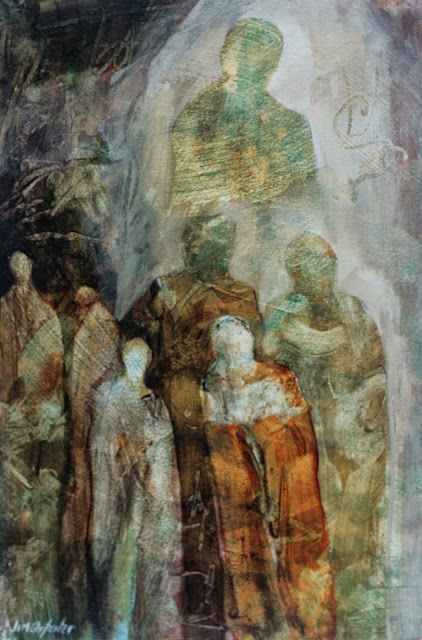 I have been so busy preparing for the opening reception for my show coming up on Friday Oct. 4, that I have not been able to paint for two days.  I've been busy with the framer, with my inventory list, pricing, post cards. Well, you know how it just goes on and on.

I will admit to worrying that my colleagues in the Challenge and the friends following me would think that I was shirking my commitment, but I felt like I had no choice. The show must go on.

I won't go into details about the utter craziness of the last 48 hours of "doing" in prep for the show. Let it suffice to say that at about noon today all of the concern was put to rest and I was able to have a nice lunch and relax.  At about 4 o'clock I went into the studio with the plan to mount some of my paintings on canvas, but I had 2 starts waiting for me to tackle for the challenge and I thought, "Why not!  You need to paint. It is still light out!  And, it will make you feel better." Painting is more about "being" than about doing anyway.

"From A Distance" is the result of deciding to paint - of deciding "to be" in the creative process -  before getting down to "doing" the business of gluing paper to canvas. That I finished it in record time - I didn't even get through my Flamenco Guitar cd more than once - and that I was able to sign and photograph it before sunset... well it's all shocking to me.  The broad outline of the large figure, the curve around him, and outlines of several other figures were there in "the scrubbed-out start" which I had abandoned many months ago.  It was all blue.  And I had no idea when I started working on it where it was going to go.

I can't help but be mystified by this painting. How did it happen so fast?   Was it because I was too tired to think or to worry about restrictions?

When I look at this painting I keep hearing Bette Midler singing "From A Distance" in the background.  I don't know quite what to make of that.  After all, I was listening to Flamenco music when I painted it.
Posted by Unknown at 4:07 PM